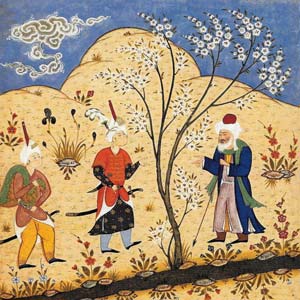 Alauddin Al-Attar (circa 1119 – 1185), also known as Fariduddin Attar of Nishapur, was a Sufi poet and mystic. Info about his life is rare and scarce. He is mentioned by only two of his contemporaries, `Awfi and Tusi. However, all sources confirm that he was from Nishapur, a major city of medieval Khorasan, now located in the northeast of Iran. It seems that he was not well known as a poet in his own lifetime, except at his home town, and his greatness as a mystic, a poet, and a master of narrative was not discovered until the 15th century. Attar’s work reflects the whole of Sufi thought, which is the idea that the body-bound soul’s return to its source can be experienced during one’s present life in mystic union attainable through inner work.

“Has the road an end or not?” He answered: “The road has an end, but the stations have no end, for the journey is twofold, one to God and one in God.”

An individual drop can be merged with the ocean, and still remain meaningful. He has found his “place.”

If you think you are behaving well then you are wrong, because seeing your own behavior as good is itself a form of pride.

A little time alone in your own room will prove more valuable than anything else that could even be given to you.

OneJourney.net is an ever-expanding place of higher wisdom, a treasure trove of higher ideas that can inspire and enlighten you. Be sure to bookmark it as one of your favorite... END_OF_DOCUMENT_TOKEN_TO_BE_REPLACED