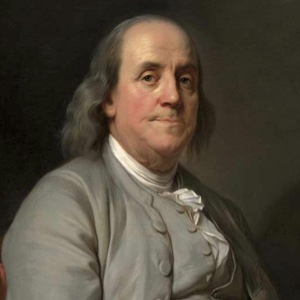 Benjamin Franklin (1706 – 1790) was an American polymath and one of the “founding fathers” of the United States. Franklin was an author, printer, politician, postmaster, scientist, inventor, humorist, civic activist, statesman, and diplomat. He is known for his discoveries and theories regarding electricity. He also founded many civic organizations, including the Library Company, Philadelphia’s first fire department and the University of Pennsylvania. At the age of 23, Franklin became a successful newspaper editor and printer in Philadelphia, where he published his Poor Richard’s Almanac, under the pseudonym “Richard Saunders” from 1732 to 1758. He was active in community affairs and colonial and state politics, as well as national and international affairs, and in June 1776, he was appointed a member of the Committee of Five that drafted the Declaration of Independence.

The longer I live, the more convincing proofs I see of this truth: that God governs in the affairs of men.

Welcome evermore to gods and men is the self-helping man. For him all doors are flung wide. Him all tongues greet, all honors crown, all eyes follow with desire. Our love goes out to him and embraces him, because he did not need it. We solicitously and apologetically caress and celebrate him, because he held on his way and scorned our disapprobation. The gods love him because men hated him. “To the persevering mortal,” said Zoroaster, “the blessed Immortals are swift.”

Talk summary: In this podcast, Guy Finley talks about our present level of mind that spends its energy trying to resolve the very problems that it creates.   Talk notes:... END_OF_DOCUMENT_TOKEN_TO_BE_REPLACED