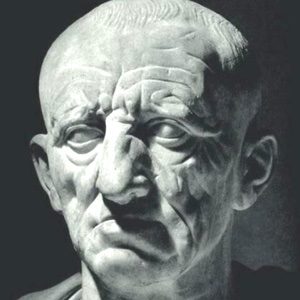 Cato the Elder (234 – 149 BCE) was a Roman soldier, historian, author, and senator. Upon his father’s death he inherited a farm in Sabine territory, where he spent his childhood learning about farming, business, and rural economy. His success as a soldier earned him a place in Rome where he followed the cursus honorum (a sequential order of public offices). He began as military tribune in 214 BCE and entered into the highest position as censor in 184 BCE. In this position he worked to save Rome’s customs in opposition to Hellenization. Cato’s work De agri cultura is the oldest remaining prose written in Latin.

Quotes by Cato the Elder…

The first virtue is to restrain the tongue. He approaches nearest to the gods who knows how to be silent, even though he is in the right.

That which is divine is invisible.

Needless to say, hardly a day goes by that we don’t find ourselves frustrated, rushing, resentful — even over minor disruptions. And then there are the major losses and trials... END_OF_DOCUMENT_TOKEN_TO_BE_REPLACED