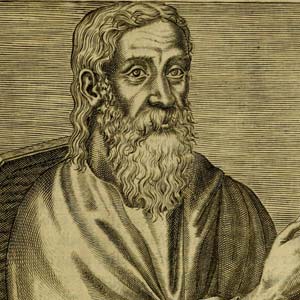 Clement of Alexandria (circa 150 – 215), also known as Titus Flavius Clemens, was a Christian theologian who taught at the Catechetical School of Alexandria. A convert to Christianity, he was an educated man who was familiar with classical Greek philosophy and literature. As his three major works demonstrate, Clement was influenced by Hellenistic philosophy to a greater extent than any other Christian thinker of his time, and in particular by Plato and the Stoics. His secret works, which exist only in fragments, suggest that he was also familiar with pre-Christian Jewish esotericism and Gnosticism. Among his pupils were Origen and Alexander of Jerusalem.

Quotes by Clement of Alexandria…

There is only one way of truth, but different paths from different places join it, just like tributaries flowing into a perennial river. Solomon adds that there are plenty of righteous people and plenty of routes for them. He explains this as follows: “The paths of the righteous shine like light.”

When people are made righteous by philosophy they have stored help for themselves and inward perception which leads to reverence for God.

It is not far, it is within reach. Perhaps you have been on it since you were born and did not know.

We all wish to be filled with wisdom, with peace, with compassion. But what are we actually filled with most of the time? Our minds spill over with reruns from... END_OF_DOCUMENT_TOKEN_TO_BE_REPLACED

Most people are so constituted that they can only be virtuous in a certain routine; an irregular course of life demoralizes them.

"The present alone is true and actual; it is the o

"Ever building, building to the clouds, still buil

"O Lord, I cannot plead my love of thee. I plead t

"Man... does not know what spiritual servitude is

"Death is not an event in life... we do not live t

"How can a soul which misunderstands itself have a

"All men who have sense and feeling are being cont