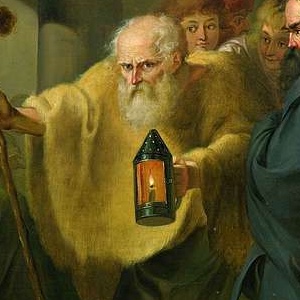 Diogenes (circa 412 – 323 B.C.E.), also known as Diogenes the Cynic, was a Greek philosopher and one of the founders of Cynic philosophy. He was born in Sinope, an Ionian colony on the Black Sea, and died at Corinth. He modeled himself on the example of Heracles, and believed that virtue was better revealed in action than in theory. He lived simply in lifestyle and behavior, a far cry from the social values and institutions of what he saw as a corrupt, confused society. He had a reputation for sleeping and eating wherever he chose in a highly nontraditional fashion, and took to toughening himself against nature. He was notorious for his philosophical stunts, such as carrying a lamp during the day, claiming to be looking for an honest man.

The only good is knowledge, and the only evil is ignorance.

The first step to self-knowledge is self-distrust. Nor can we attain to any kind of knowledge, except by a like process.

We must fight the fight! We only find rest in effort.

The OneJourney Project is based on the powerful book The Seeker, The Search, The Sacred by OneJourney founder and self-realization author Guy Finley. The purpose of this book is to... END_OF_DOCUMENT_TOKEN_TO_BE_REPLACED