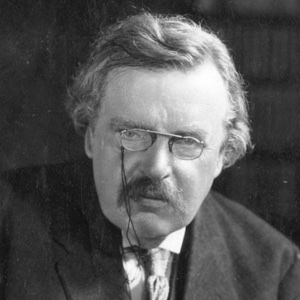 G. K. Chesterton (1874 – 1936) was an English writer, poet, philosopher, dramatist, journalist, orator, lay theologian, biographer, and literary and art critic. Chesterton is often referred to as the “prince of paradox.” Chesterton is well known for his fictional priest-detective Father Brown, and for his reasoned apologetics. Biographers have identified him as a successor to such famed Victorian authors as Matthew Arnold, Thomas Carlyle, Cardinal John Henry Newman, and John Ruskin.

It is merely that when a man has found something which he prefers to life, he then for the first time begins to live.

The center of every man’s existence is a dream. Death, disease, and insanity are merely material accidents, like a toothache or a twisted ankle. That these brutal forces always besiege and often capture the citadel does not prove that they are the citadel.

Being alone holds beautiful possibilities for the person who is open to them. I don’t know if you’ve noticed, but it’s hard not to these days: it seems like everyone... END_OF_DOCUMENT_TOKEN_TO_BE_REPLACED