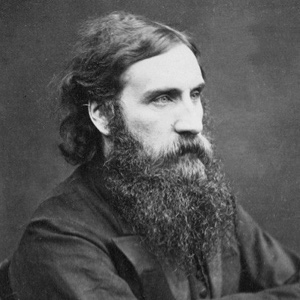 George MacDonald (1824 – 1905) was a Scottish author, poet and Christian minister. He graduated from the University of Aberdeen in 1845 with a master’s degree in chemistry and physics. In 1848 MacDonald began theological training at Highbury College and was appointed minister of Trinity Congregational Church, Arundel, in 1850. He later taught for some time at the University of London. He was a pioneering figure in the field of fantasy literature and his writings have been cited as a major literary influence by many notable authors. In addition to his fairy tales, MacDonald wrote several works on Christian apologetics. His best-known works are Phantastes, The Princess and the Goblin, At the Back of the North Wind, and Lilith.

All the doors that lead inward to the secret place of the most high are doors outward: out of self — out of smallness — out of wrong.

I find the doing of the will of God leaves me no time for disputing about His plans.

Saint Augustine cries, “Lord I cannot love you, but come in and love yourself in me.” According to Saint Paul, we must put off our own natural form and put on the form of God, and Saint Augustine tells us to discard our own mode of nature. Then the divine nature will flow in and be revealed. Saint Augustine says, “Those who seek and find, find not. He who seeks and finds not, he alone finds.” Saint Paul says, “What I was, was not I, it was God in me.”

Guy Finley explains that as we persist with the intention to slow down, we will gradually come to see that underneath our rushing is an agitation that is actually meant... END_OF_DOCUMENT_TOKEN_TO_BE_REPLACED

The most certain sign of wisdom is continual cheerfulness; her state is like that of things in the regions above the moon, always clear and serene.