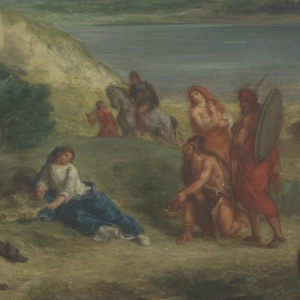 Ovid (circa 43 B.C.E.), also known as Publius Ovidius Naso, was a Roman poet who lived during the reign of Augustus. He was a contemporary of the older Virgil and Horace, with whom he is often ranked as one of the three canonical poets of Latin literature. His father wanted him to study rhetoric toward the practice of law, but instead he began travelling to Athens, Asia Minor, and Sicily. He held minor public posts, but resigned to pursue poetry probably around 29 – 25 B.C.E. Ovid’s first recitation has been dated to around 25 B.C.E., when he was eighteen years old. Ovid is today best known for the Metamorphoses, a 15-book continuous mythological narrative that is considered one of the most important sources of classical mythology.

There is no need of words; believe in facts.

The burden which is well borne becomes light.

Be sincere with yourself. Whether men love or hate, admire or despise you, is of but little importance. Speak only what is true, do only what is right.

Everything we are is a reflection of greater powers than we can know, and our true strength comes in aligning ourselves with them. Pain is a universal condition. I’m talking... END_OF_DOCUMENT_TOKEN_TO_BE_REPLACED

The most certain sign of wisdom is continual cheerfulness; her state is like that of things in the regions above the moon, always clear and serene.