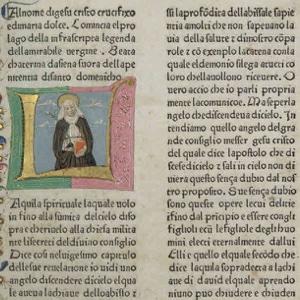 Raymond of Capua (1330 – 1399) was a leading member of the Dominican Order and served as its Master General from 1380 until his death. He was born in Capua, a member of a well-known family of that city. In 1350, while a student of law at the University of Bologna, he entered the Dominican Order. He was assigned to be the spiritual director to Saint Catherine of Siena in 1376, and eventually became her friend and closest advisor. His writings include two biographies of St. Catherine of Siena and St. Agnes of Montepulciano.

Quotes by Raymond of Capua…

God related to Catherine of Siena: “Do you know, daughter, who you are and who I am? If you know these two things you will have beatitude within your grasp. You are she who is not, and I am He who is.”

(If people changed inwardly) They would be different, richer, and higher, but would not at all be discontinued. What would be destroyed is whatever is false in them, while whatever is true in them would blossom and grow stronger.

Everything we are is a reflection of greater powers than we can know, and our true strength comes in aligning ourselves with them. Pain is a universal condition. I’m talking... END_OF_DOCUMENT_TOKEN_TO_BE_REPLACED