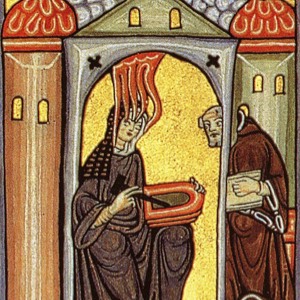 Saint Hildegard of Bingen (1098 – 1179) was a German Benedictine abbess, writer, composer, philosopher, and Christian mystic. Hildegard said that she first saw “The Shade of the Living Light” at the age of three, and by the age of five she began to understand that she was experiencing visions. Perhaps because of Hildegard’s visions, her parents offered her as an oblate to the Benedictine monastery at the Disibodenberg. She founded the monasteries of Rupertsberg in 1150 and Eibingen in 1165. She wrote theological, botanical, and medicinal texts, as well as letters, liturgical songs, and poems. Her most significant works were her three volumes of visionary theology: Scivias (Know the Ways).

Quotes by Hildegard of Bingen…

I see, hear and know simultaneously, and learn what I know as if in a moment. But what I do not see, I do not know, for I am not learned.

In whatever way people may praise us, they never teach us anything new.

Talk summary: In this short talk featuring music performed live at Life of Learning Foundation in Southern Oregon, Guy Finley talks about the music and rhythm of life itself, and... END_OF_DOCUMENT_TOKEN_TO_BE_REPLACED