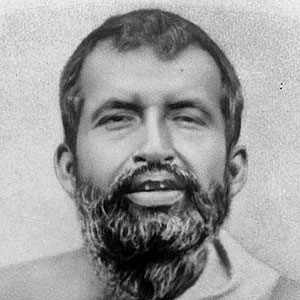 Sri Ramakrishna (1836 – 1886) was an Indian mystic born in the village of Kamarpukur into a very poor, pious, and orthodox Brahmin family. But growing up at a transit-point in well-established pilgrimage routes brought him into contact with holy men so that he was influenced by several religious traditions. Ramakrishna experienced spiritual ecstasies from a young age. His teachings were imparted in rustic Bengali, using stories and parables. Sources for his life and teachings come from the writings of his disciples and live witnesses.

A little boy wearing the mask of a lion looks quite fierce. He runs out where his little sister is playing and shrieks out in a horrible voice, which shocks and terrifies his sister, making her cry out in terror, and making her attempt to escape from the frightening creature. But when her brother takes off the mask, she runs back to exclaim, “It is my nice brother after all!”

No matter where you place it, gold is gold.

Everyone foolishly assumes that his clock alone tells correct time. Christians claim to possess exclusive truth. Countless varieties of Hindus insist that their sect, no matter how small and insignificant, expresses the ultimate position. Devout Muslims maintain that Koranic revelation supersedes all others. The entire world is being driven insane by this single phrase: “My religion alone is true.” O Mother, you have shown me that no clock is entirely accurate. Only the transcendent sun of knowledge remains on time. Who can make a system from Divine Mystery? But if any sincere practitioner, within whatever culture or religion, prays and meditates with great devotion and commitment to Truth alone, Your Grace will flood his mind and heart, O Mother. His particular sacred tradition will be opened and illuminated. He will reach the one goal of spiritual evolution.

We have in us the power to transcend the bounds of our narrow individuality, and to find ourselves in that which seems to lie beyond us.

In this short video, Guy Finley talks about how rushing and being chronically late for appointments is connected to an unseen greedy nature that is always attempting to reconcile the... END_OF_DOCUMENT_TOKEN_TO_BE_REPLACED