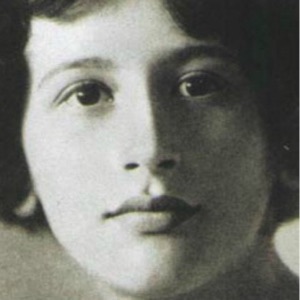 Simone Weil (1909 – 1943) was a French philosopher, mystic, and activist. She became a teacher and taught philosophy intermittently throughout the 1930’s. Most of the work published in her lifetime was in the form of short essays for small political and literary journals, addressed to particular audiences. Such writings form only a small part of her collected work, and much of that which is most widely known was published posthumously. In the 1950’s and 1960’s her work became famous in continental Europe and throughout the English-speaking world.

In general we must not wish for the disappearance of any of our troubles, but grace to transform them.

Even if our efforts of attention seem for years to be producing no result, one day a light that is in exact proportion to them will flood the soul.

The beauty of the world is Christ’s tender smile for us, coming through matter.

The chief of our concerns is that of ourselves, yet how often have we not been told by the inner voice, that to pursue our own interests at the expense of others would be to do wrong! So we imagine that we are sometimes obeying the impulse of nature, but all the while we are resisting it. In listening to the voice of our senses, we turn a deaf ear to the dictates of our heart.

OneJourney.net helps you connect with the Greatness that lies at the core of your being. And it gives you a way to share your discoveries by contributing inspiring quotes to... END_OF_DOCUMENT_TOKEN_TO_BE_REPLACED