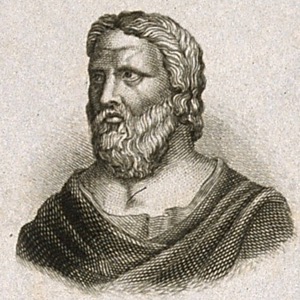 Heraclitus (circa 535 – 475 B.C.E.) was a pre-Socratic Greek philosopher and a native of the city of Ephesus, then part of the Persian Empire. Little is known about his early life and education, the main source for this being Diogenes Laertius. Along with Parmenides, Heraclitus is commonly considered to be one of the two founders of ontology: the philosophical study of being. Diogenes states that Heraclitus’ work was “a continuous treatise on nature, but was divided into three discourses, one on the universe, another on politics, and a third on theology.” As with the other pre-Socratics, his writings survive now only in fragments quoted by other authors.

I have sought to know myself.

It is all the same to be living and dead, waking and sleeping, young and old, as each of these alternately change into the other.

To those who awake, there is one world in common, but to those who are asleep, each is withdrawn to a private world of his own.

When a natural discourse paints a passion or an effect, one feels within oneself the truth of what one reads. This feeling was there before, although one did not know it. Therefore, one is inclined to love him who makes us feel it, for he has not shown us his own riches, but ours.

Being alone holds beautiful possibilities for the person who is open to them. I don’t know if you’ve noticed, but it’s hard not to these days: it seems like everyone... END_OF_DOCUMENT_TOKEN_TO_BE_REPLACED