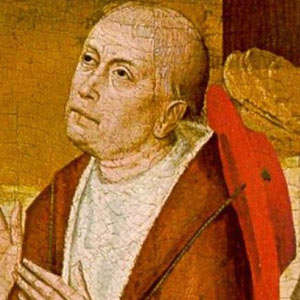 Nicholas of Cusa (1401 – 1464) was a German philosopher, theologian, jurist, and astronomer. He entered the Faculty of Arts of the Heidelberg University in 1416 as a “cleric of the Diocese of Trier,” studying the liberal arts. Afterwards, he entered the University of Cologne in 1425 as “a Doctor of Canon Law,” where he appears to have both taught and practiced there. After a successful career as a papal envoy, he was made a cardinal in 1448, and in 1450 he was both named Bishop of Brixen, in Tyrol, and commissioned as a papal legate to the German lands to spread the message of reform. He made spiritual and political contributions in European history, and was noted for his deeply mystical writings about Christianity.

Quotes by Nicholas of Cusa…

The wall of the Paradise in which Thou, Lord, dwellest, is built of contradictories, nor is there any way to enter but for one who has overcome the highest Spirit of Reason who guards its gate.

Are you afraid of some condition in your life? Here’s a life-transforming secret: that seemingly scary condition, whatever it may be, is not the problem. It is your reaction that... END_OF_DOCUMENT_TOKEN_TO_BE_REPLACED